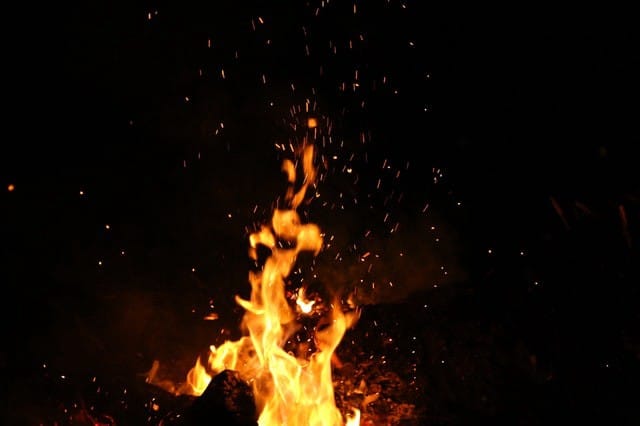 “Look again and you will see the Gods rise in the most human and unassuming of eyes.” — Kate Tempest

I think her work comes closest to expressing life in the 21st century Western World.

She embodies something I’m calling the Metamodern Flame.

Metamodernism is an emerging cultural phase and worldview that can help us deal with the many crises faced by our civilisation. I wrote more about it here.

The Metamodern Flame is our ability to find the sparks of change within the very systems, culture and people that are destroying our planet.

In Tempest’s case she manages to find beauty, meaning and transformation within the most ordinary and unassuming of places. In her album Let Them Eat Chaos, she describes many people who carry out the toxic patterns of our neoliberal, capitalist, patriarchal society. But she does so in a way that highlights their deep humanity by showing that their actions are inspired by the same basic human needs that we largely all share in common.

In my life I have found it very easy to disregard those who don’t question and just do as society tells them. It’s easy to see their entire being as created by our oppressive systems. They want the things that adverts tell them to want. They chase the wealth and success cherished by our culture. Many left-wing (or postmodern) commentators end up disregarding their lives as being simply the playthings of global elites. But as Tempest shows, if we are to get these people on board in our efforts to change the world, we cannot disregard them but must reach out and fan the flame of our common humanity.

Dominic Barter and The Metamodern Flame

I found a deep synchronicity between this perspective and some of the things I have been learning in my work in the Extinction Rebellion Conflict Team. I recently went to a training weekend with Dominic Barter who back in the 1990s went into the incredibly dangerous Favelas in Rio in order to do what he calls ‘hanging out’. This ‘hanging out’ eventually led to the creation of restorative circles, which are a community held justice process for repairing the harm caused by incidents. Instead of killing each other they could come together as a community to hear each other’s grievances and find solutions.

In the weekend we spent with him, Dominic focused attention on how his work had been co-opted and productised by people around the world. His method is to listen deeply to a community of people and let social systems emerge from that listening. He is always trying to find what he calls the restorative flames, which are the positive seeds of transformation already embedded in a particular group of humans. This means that any social system he helps create emerges directly from the group that he is working with. Those who co-opt his work end up doing the exact opposite of this. They take the methods he’s developed with particular groups and apply them dictatorially in completely different contexts, often in return for payment.

This co-option represents the continued colonial mindset present in our culture. In the era when Western countries had colonies around the world there was an idea that we, the white European, knew best. Our systems of government, justice, culture and education were superior, so we were doing a great service by exporting them throughout the world. This wasn’t just an altruistic act however, because by exporting our institutions we were able to shape, control and exploit millions of people worldwide.

This colonial mindset is very tied to the enlightenment or modernist way of seeing reality. This argues that through science we can understand an objective reality and thus make progress. In Europe we had made the most progress and had the deepest understanding of reality, therefore it was a gift to spread this knowledge with others. This way of being can be seen today in corporate structures where those at the top, feel like they have the most knowledge, and thus autocratically impose policies on the rest of their organisations. I’m also reminded of this approach when people suggest that their one specific form of society, spirituality or culture is the answer to our civilisation’s crises. By arguing in this way they reinforce the colonialist mindset.

There is not just one reality but many. Postmodernism brought the idea that reality is largely a cultural creation formed by the values and assumptions that we bring to it. We create reality through our perceptions. If this is the case, then the top down approach of modernism is hubristic in the extreme. How do we know that our institutions or systems can apply in completely different cultural contexts? When we look at the experience of trying to export parliamentary democracy throughout the world we find that many of these attempts fail. Postmodernism gives us an explanation for this and argues for a bottom-up approach. But sometimes it ignores the fact that some people do have insights and perspectives that can guide us.

Metamodernism attempts to find a balance between top-down and bottom-up approaches. It recognises that there isn’t a ‘view from nowhere’ as modernists suggested. But it also accepts that we need models and ideas to shape how we approach bottom-up information. To do this we use our current knowledge to try to find the metamodern flame i.e. the things we see happening in a particular section of society that we want to support. But we are constantly receptive to feedback and our knowledge is constantly adapting to given situations.

We are constantly trying to find a balance between asserting our own ideas and ideals on a particular situation and being completely receptive to the other. This can be seen as a dance along a spectrum between yin (receptivity) and yang (activity). Of course, it’s not always about being precisely in the middle between these two extremes. Sometimes a particular environment would respond better to a more extreme approach.

Playing with the Spectrum

It is vital to realise that this spectrum exists and what place we are currently occupying along it. Then we can play with how given situations respond to a particular approach. We can also begin to think about how we can create what John Vervaeke calls opponent processing systems that help find the optimum place on the spectrum given particular environmental conditions. Opponent processing is when two parts of a system are in opposition to each other and through their opposition a balance is created that can adapt to changes in the environment. Examples of this in the human body are the sympathetic and parasympathetic nervous systems. The sympathetic nervous system is constantly on the lookout for signs of danger and wants to respond with increased heart rate, alertness and blood flow. The parasympathetic nervous system, on the other hand, is constantly trying to conserve energy by lowering the heart rate and relaxing the body.

I think there is even a similar thing happening within Extinction Rebellion where the Regenerative Culture Team, that advocates for ending our culture of productivity and burnout, is in opposition with XR’s demand to ‘Act Now’. Whether the balance between these two cultural systems is healthy I am unsure. But creating these types of dynamic systems is definitely an important step in ending our colonialist, patriarchal society.

The idea of the Metamodern Flame also ties in with many of the points I made in ‘Towards a Metamodern Spirituality’. In it I argued that there was a paradox at the heart of spirituality because existence is godly because it miraculously arises out of nothing, whilst at the same time some bits of it are more godly that others. The Metamodern Flame is about treating all parts of reality as sacred whilst at the same time trying to move towards more godliness. It lives within and exploits this paradox.

There is also a deep resonance here with Non Violent Communication. Which suggests that under all human acts of oppression, domination and violence you can find deep needs which are being unmet. These deep needs are largely common to all human beings. We can use our skills of perception to interpret and translate other peoples violence into the language of needs which we all share. By doing this we can help them escape the pain of being separated from what they actually desire.

Another connection to spirituality is that the metamodern flame is not just about finding common needs as suggested by NVC. But also about finding the things that are unique to a particular person, situation or group. This is the showing up part of the waking up, cleaning up, growing up, showing up model suggested by Ken Wilber. It explores how we can ‘show up’ in our uniqueness and give what we have to offer to the world. In our interactions with others we can constantly be searching for their uniqueness and encouraging it to come to the fore.

The Metamodern Flame has been a revelation in my life. I have begun to use it to find the seeds of transformation in all areas of my life from my relationships to my work. I think it can be applied to pretty much anything and on many different levels. We can use it to help create new social systems that work actively to overturn the colonialist mindset. But we can also use it in our day to day interactions with friends, colleagues and lovers.

Let’s take a representative of our toxic society that we all love to hate. Maybe a sexist, cocaine guzzling, carefree investment banker.

We could easily chastise and cast aside them with no second thought. But the Metamodern Flame can help us realise that there are deep needs within them that are currently being expressed in toxic behaviours but could be channeled towards beauty and transformation. There is also the uniqueness and gifts that this person has to offer which are largely repressed by their current lifestyle. If you looked closely enough you would find their uniqueness buried in their very toxic behaviours. It is through connecting with their deep needs and uniqueness that we are able to transform them and then society.