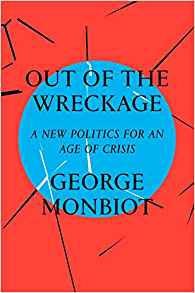 Out of the Wreckage by George Monbiot

What is the new story that can overthrow neoliberalism and create a kinder world? Monbiot thinks the answer lies in returning to community and belonging. And he suggests the poltics and economics that can get us there!

Out of the Wreckage

Chapter 1: A Story of Our Times

Stories are the means by which we navigate the world.

George Marshall: “stories perform a fundamental cognitive function: they are the means by which the Emotional Brain makes sense of the information collected by the Rational Brain.”

A string of facts, however well attested, has no power to correct or dislodge a powerful story.

Two most successful political stories of the twentieth century: social-democratic story and the neoliberal story.

The failure to tell a new story has been matched by an equally remarkable omission: the failure to discern and describe the values and principles that might inform our politics.

Our values tend to cluster around certain poles.

Intrinsic values: are expressed as compassion, connectedness and kindness towards all living beings, including oneself.

Extrinsic values: are expressed as a desire for self-enhancement, through gaining, for example, status or power.

If our purpose is to create a kinder world, we should embed within the political story the intrinsic values that promote this aim.

Principles could be seen as the soil that derives from the bedrock of values.

We are astonishing creatures, blessed with an amazing capacity for kindness and care towards others. But this good nature has been thwarted by a mistaken view of our own humanity. We have been induced by certain politicians, economists and commentators to accept a vicious ideology of extreme competition and individualism that pits us against each other, encourages us to fear and mistrust each other, and weakens the social bonds that make our lives worth living.

Though it is not the only factor, this has helped to usher in an age of loneliness, in which, on this crowded planet, we are disconnected from each other as never before. The result is an epidemic of unhappiness and of psychological and physical illness. The atomisation we suffer has eroded our sense of common purpose and sapped our belief that, by working together, we can change life for the better. It has undermined democracy, and allowed intolerant and violent forces to fill the political vacuum. We are trapped in a vicious circle of alienation and reaction.

By coming together to revive community life, we, the heroes of this story, can break the vicious circle. Through invoking the two great healing forces -togetherness and belonging - we can rediscover the central facts of our humanity: our altruism and mutual aid.

Where there is atomisation, we will create a thriving civic life. Where there is alienation, we will forge a new sense of belonging: to neighbours, neighbourhood and society. Where we find ourselves crushed between market and state, we will develop a new economics that treats both people and planet with respect. Where we are ignored and exploited, we will revive democracy and retrieve politics from those who have captured it.

Perhaps the most dangerous impact of neoliberalism is not the economic crises it has caused, but the political crises.

As the domain of the state is reduced, our ability to change the course of our lives through voting also contracts.

Instead, neoliberal theory asserts, people can exercise choice through spending.

Without a new, guiding story of their own, allowing them to look towards a better future rather than a better past, it was inevitable that political parties which once sought to resist the power of corporations and the very rich would lose their sense of direction.

The principal strategy of the leaders of these parties, such as Bill Clinton and Tony Blair, was to triangulate.

When state provision, community, a sense of belonging and contact with physical reality are stripped away, all that is left is shopping.

Consumerism stifles feeling, inducing a state of glazed compliance, dulling our concern both for the living planet it assaults and for other people.

All these trends reinforce the dominant story of our times: that we are governed by self-interest and driven by the desire to outcompete those around us.

Mental Health Crisis: it seems to me that the erosion of community and our separation from others is sufficient to account for much of it.

We are alienated from each other, from the systems that govern our lives, from the spirit of inquiry, from the natural world, and from tangible reality. Socially, emotionally, intellectually and physically, we are in a poor state of health. The political consequences can be catastrophic.

As Hannah Arendt argued, it is in the powder of shattered communities that anti-politics swirls, raising dust devils of demagoguery and extremism.

A useful way of understanding how people respond to political change is a concept coined by the biologist Daniel Pauly: “Shifting Baseline Syndrome”

We perceive the situation that prevailed in our youth as normal and natural, and use it as the baseline against which we measure change. By this means, over the generations, we adjust to almost any degree of deprivation or oppression, imagining it to be natural and immutable.

If alienation is the point on which our crises converge, belonging is the means by which we can address them.

From infancy we have a powerful need for all these modes of belonging: to be owned by a family and a society, to own a place within them that allows us to reciprocate and to feel at ease with that place.

We must create what practitioners call “thick networks”: projects that proliferate, spawning further ventures and ideas that were not envisaged when they started.

A tipping point is reached when 10 to 15 per cent of local residents are engaging regularly. Community then begins to solidify, causing a flowering of social enterprise and new activities.

The urban theorist Mike Davis points out that there is a “consistent affinity between social and environmental justice, between the communal ethos and a greener urbanism”.

The revived community can become a source of strength on which we can build our wider movements. It is a lived example of the world we want to create, a repository of organisational techniques and experience, an inspiration to which we can keep referring while building our wider vision: a demonstration that another world is not just possible, but already exists.

Their shared premise is mistaken. The market alone cannot meet all our needs; nor can the state; nor can a combination of the two.

Something is missing: the commons.

A commons consists not only of a resource over which a community has shared and equal rights, such as land, fresh water, minerals, knowledge, culture, scientific research or software.

Thriving commons are, I believe, crucial components of a politics of belonging.

Tragedy of the commons: common property will always be destroyed, because the gain that individuals make by over-exploiting it will outweigh the loss they suffer as a result of its over-use.

He had assumed that individuals can behave as selfishly as they like in a commons, because no one will stop them. In reality, traditional commons are closely regulated by the people who control them.

A primary purpose of most modern trade agreements is to secure and extend the intellectual property of transnational corporations, at the expense of those who must then pay for access.

So how, in an ideal world, would we best determine how the use and value of resources should be distributed between state, market and commons?

Those forms of value that are generated through work, enterprise and ingenuity properly belong to the people who produce them. In many cases, this means that value accrues to individual citizens and private commercial enterprises. (The state, to discharge its duties, is entitled to tax part of this gain.) Those resources that are not created by people, or that are created by society as a whole, should most appropriately be managed as commons, and the value arising from them shared by a community

Land is an asset that no one created, but it has been acquired in large part by a minority, who can thus charge others for its use.

Those who use the land exclusively should pay a community land contribution - as compensation.

Community land contributions create a fund that can be administered by either local government or a community land trust. When land is sold, either the trust or the local authority can use the fund to buy it and then charge people or companies for its exclusive use.

Similar principles could be applied to many common assets that private businesses and individual users currently take either freely or for very low fees, such as the atmosphere, minerals, wild fish, forests, water and the electromagnetic spectrum.

A frame is the mental structure that shapes the way in which we apprehend an issue.

Refuting a dominant frame serves only to reinforce it. To displace it, we must create a new one.

The challenge is to find ways to extend the process in two directions: to allow citizens to determine a greater portion of local budgets, and to introduce participatory budgeting at the state and national levels.

A fundamental principle of a politics of belonging should be that powers and responsibilities are handed to the smallest political unit that can reasonably discharge them. This principle, known as subsidiarity, is widely accepted in theory, but seldom deployed in practice.

An analysis by US political scientists found an almost perfect linear relationship, across thirty-two years, between the money available to Congressional candidates and their share of the vote.

In the first phase, expert tutors arrived, often from other parts of the world, to explain the issues to the convention’s members. In the second phase, the delegates travelled to public meetings around their provinces and took written submissions from other citizens. In the third phase, helped by facilitators who ensured that every voice was heard, they worked out what to do.

One proposal suggests that every vote not cast in an election should be considered a vote for sortition.

Fair political funding system. Every party or independent candidate would be entitled to charge the same small fee for membership.

On average, 42 per cent of people expressed confidence in government.

The people of Switzerland vote in around ten referendums a year, clustered into three or four polling days.

Any law passed by parliament can be challenged by the people. If, within one hundred days, someone can furnish 50,000 signatures from people opposed to the law, the government is obliged to put the question to the country.

These referendums are binding: if the people vote against it, the law is struck down. People can also propose amendments to the constitution, if they can gather 100,000 signatures within eighteen months.

But one of the crises we confront is that power has leaked out of national institutions and into global forums, where it can no longer be held to account.

The IMF, the World Bank and the UN Security Council are controlled by a minority of nations (the United States, uniquely, has veto powers over all three), but their writ extends globally.

There are plenty of issues that can be resolved only globally.

Plainly, the principle of subsidiarity should operate here: only issues that nation-states cannot handle should be determined at the global level.

Most of this story cannot be realised without regime change. Unless people and parties supporting a generous, inclusive politics win elections, the hope this book aims to ignite will remain unfulfilled.

Big Organising means starting with major goals: policies commensurate with the scale of the challenges we face. It means pursuing big targets: most of the electorate, rather than a few narrow segments. It means relying on a great mobilisation of volunteers.