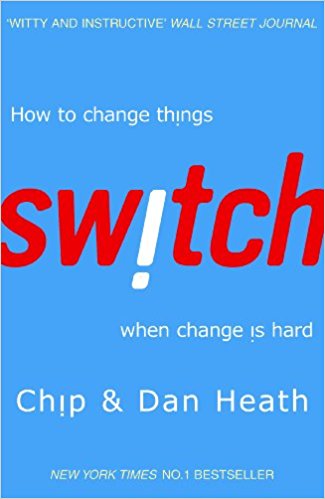 The aim of the book: to produce a methodology for how to make change happen in the world.

Analogy of a rider on an elephant trying to move in a direction. (towards change)

To make someone change: You must reach both Rider and Elephant.

Normally: Rider has a problem-seeking mindset: "What's broken, and how do we fix it?"

Instead: Search for successful efforts, worth emulating.

Question: "What's working and how can we do more of it?"

What are the roots of your problem? Does it trace back to something in your childhood?

When was the last time you saw a little bit of the miracle, even just for a short time?

Go investigate the most successful (villagers/ managers moments in the day).

Give the Rider a script that explains how to act.

Decision Paralysis - more options, even good ones, can freeze us and make us retreat to the default plan.

Point to the Destination

This is a vivid picture from the near future that shows what could be possible.

It's essential to marry your long-term goal with short-term critical moves.

Back up your destination postcard with a good behavioural script.

Find ways to help others see the problems or solutions in ways that influence emotions, not just thought.

Trying to fight inertia and indifference with analytical arguments is like tossing a fire extinguisher to someone who's drowning. The solution doesn't match the problem.

Example of Re-Mission (a game for young Chemotherapy patients)

Roxxi, the nanobot boldly defeating cancer, by taking chemotherapy and antibiotics which fuel his ray gun.

If you need quick and specific action, then negative emotions might help. But most of the time when change is needed, it's not a stone-in-the-shoe situation.

Positive emotions are designed to "broaden and build" our repertoire of thoughts and actions. Joy, for example, makes us want to play.

Interest, broadens what we want to investigate.

Most of the big problems we encounter are ambiguous and evolving. They don't look like burning platform situations. To solve these problems we need to encourage open minds, creativity and hope.

One way to motivate action: Make people feel as though they are already closer to the finish line than they might have thought.

Example: Don't publicly announce a charity fundraiser until you've already got 50% of the money in the bag.

Look for the first two stamps to put on your team's cards. "I'm not a sloth. I'm an exerciser!"

Make an effort to remind people what's already been conquered. Create a sense of progress.

To get the Elephant off its duff you need to re-assure it that the task won't be so bad. "Looks it's only 5 minutes!"

If people are facing a daunting task and their instinct is to avoid it: You've got to break down the task. Make the change small enough that people can't help but score a victory.

e.g. Do one page of writing. Pay off a single debt.

"if some example of successful change could somehow be achieved quickly, it might be possible to use that to set other changes in motion" - Celebrate every incremental victory!

Miracle Scale - 10 is the miracle. But what are the small milestones that are attainable and visible on the way to the eventual destination?

Accentuate positive. Emphasise the next goal to fulfil.

How can you make your change a matter of identity rather than of consequences?

When people make choices they tend to rely on one of two basic models of decision making: the consequences model or the identity model.

Weighing the costs and benefits of our options and making the choice that maximises our satisfaction.

We ask ourselves: Who am I? What kind of situation is this? What would someone like me do in this situation?

This model explains the way most people vote, which contradicts our notion of the "self interested voter".

St. Lucia Parrot Example - "This parrot is ours. Nobody has them but us. We need to cherish it and look after it"

The St. Lucians began to embrace their parrot, as though it had always been a part of their national identity.

When you think about the people whose behaviour needs to change, ask yourself whether they would agree with: "I aspire to be the kind of person who would make this change".

"foot in the door" technique - do something small to convince people they are "concerned citizens" before asking for something bigger.

Fixed Mindset: belief that their abilities are basically static.

Growth Mindset: belief that abilities are like muscles-they can be built up with practice.

The growth mindset can be taught and it can change lives.

Failure should be seen as part of the learning process.

People have a systematic tendency to ignore the situational forces that shape other people's behaviour.

Most people attribute their marital problems to some deeply engrained personality characteristics of their spouse. e.g. "My husband is a stubborn person"

Shaping the path is making the journey easier.

Haddon Matrix: A simple framework that provides a way to think systematically about accidents by highlighting three key periods of time.

Event interventions - accept that crashes will happen and ask ourselves how we can reduce the chances of injury. e.g. seat belts.

Motion Study: Where you follow one person through the entire process that you are looking to change.

e.g. Making a purchase. Filing a complaint. Recycling an object.

One of the subtle ways in which our environment acts on us is by reinforcing (or deterring) our habits.

Example of the Vietnam Veterans Drug story. The change in environment (returning home) prevented the continuation of wartime drug use.

The good thing about habits is they allow lots of good behaviours to happen without the rider taking charge.

Have an "action trigger": You will execute a certain action (working out) when you encounter a certain trigger (the morning).

Example: pre-loading decisions. Asking students to decide when they will do the essay.

In ambiguous situations, we all look to others for cues about how to behave.

We often do things because we see our peers doing them. It's not only your body-pierced teen who follows the crowd.

Example: Filling tip jars to send a signal about the "norm" of the herd.

Publicise the group norm: "Other people are getting their work done. So what aren't you?"

Use "free spaces" - underground small scale meetings where reformers can gather and ready themselves for collective action without being observed by members of the dominant group.