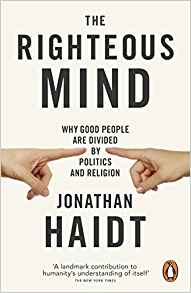 The Righteous Mind: Why Good People are Divided by Politics and Religion by Jonathan Haidt

Jonathan Haidt argues that we all have hard-wired moral intuitions that determine our religious and political allegiances. He believes that these moral instincts evolved to help us form communities and compete with other groups. This is only one side of an ongoing debate but it is still very interesting. Especially the later stuff about the 'hive switch'!

Central Metaphor: The mind is divided, like a rider on an elephant.

The rider's job is to serve the elephant.

Chapter 1: Where Does Morality Come From?

The Rationalist Answer - Morality is self-constructed by children on the basis of their experiences with harm.

Kids know that harm is wrong because they hate to be harmed, and they gradually come to see that it is therefore wrong to harm others, which leads them to understand fairness and eventually justice.

We're born to be righteous, but we have to learn what, exactly, people like us should be righteous about.

Chapter 2: The Intuitive Dog and Its Rational Tail

People reason and people have moral intuitions but what is the relationship among these processes?

Plato - Reason could and should be the master.

Hume - Reason the servant of the passions.

Haidt things that that Hume is right.

If you want to change someone's mind about a moral or political issue. Talk to the elephant first.

Intuitions can be shaped by reasoning. Especially when reasons are embedded in a friendly conversation or an emotionally compelling novel, movie or news story.

When we see or hear things other people do, the elephant begines to lean immediately. The rider, who is always trying to anticipate the elephant's next move, begins looking around for a way to support such a move.

The worship of reason, which is sometimes found in philosophical and scientific circles, is a delusion. It is an example of faith in something that doesn't exist.

Urges a more intuitionist approach to morality and moral education.

Part 2: There's More to Morality than Harm and Fairness

Central Metaphor: The righteous mind is like a tongue with six taste receptors.

People who grow up in Western, Educated, Industrial, Rich and Democratic (WEIRD) societies are statistical outliers.

The WEIRDer you are, the more you perceive a world full of separate objects rather than relationships.

Moral domain unusually narrow in WEIRD cultures. Where it is limited to ethics of autonomy (i.e. individuals oppressing each other)

Moral matrices bind people together and blind them to the coherence, or even existence, of other matrices.

A small set of innate and universal moral foundations can be used to construct a great variety of moral matrices.

Deontology and utilitarianism are "one-receptor" moralities that are likely to appeal most strongly to people who are high on systematizing and low on empathizing.

Chapter 7: The Moral Foundations of Politics

Defines innateness as "organized in advance of experience" - like the first draft of a book. Revised as individuals grow up within diverse cultures.

The left relies primarily on care and fairness foundations. Whereas the right uses all five.

Republicans understand the social intuitionist model better than do

Durkheimian vision of society. In which the basic social unit is the family, rather than the individual. And in which order, hierarchy and tradition are heavily valued.

Contrasted with the liberal Millian vision, which is more open and individualistic.

Revisions to Moral Foundations Theory to do a better job of explaining intuitions about liberty and fairness.

Democrats often say that Republicans have duped these people into voting against their economic self-interest. But in fact they are voting for their moral interests.

They don't want their nation to devote itself primarily to the care of victims and the pursuit of social justice.

Chapter 9: Why are we So Groupish?

Darwin believed that morality was an adaption that evolved by natural selection operating at the individual level AND at the group level.

But idea banished with argument that the free rider problem dooms group selection. Seemingly altruistic acts had to be explained as covert forms of selfishness.

Multi-level selection would go a long way to explaining why people are simultaneously so selfish and so groupish.

4. Evolution can be fast.

Haidt still argues that most of human nature was shaped by natural selection operating at the level of the individual. Most - but not all.

When Haidt started writing The Happiness Hypothesis (his first book): he thought happiness came from within. As Buddha and the Stoic philosophers said thousands of years ago.

But by the time he had finished writing he realized that happiness comes from between.

We evolved to live in groups. Our minds are designed not only to help us win the competition within our groups but also to help us unite to win competitions against other groups.

We have the ability (under certain circumstances) to transcend self-interest and lose ourselves (temporarily and ecstatically) in something larger than ourselves.

This ability is the Hive Switch.

Another way of stating Durkheim's idea that we are Homo Duplex. We live most of our lives in the ordinary (profane) world, but we achieve our greatest joys in those brief moments of transit to the sacred work. In which we become "simply a part of the whole".

Oxytocin and Mirror neurons are the stuff of which the hive switch is made:

We are not designed to love everybody. Just parochial love -love within groups- amplified by similarity, a sense of shared fate and the suppression of free riders.

Chapter 11: Religion is a Team Sport

If you think about religions as a set of beliefs about supernatural agents, you're bound to misunderstand it.

You'll see those beliefs as foolish delusions, perhaps even parasites that exploit our brains for their own benefit.

But if you take a Durkheimian approach to religion (focusing on belonging) and a Darwinian approach to morality (involving multilevel selection), you get a very different picture.

Religious practices have been binding our ancestors into groups for tens of thousands of years.

That binding involves some blinding when a person, book or principle is declared sacred.

Our ability to believe in supernatural agents from:

But groups that used them to construct moral communities were the ones that lasted and prospered. They used their gods to elicit sacrifice and commitment from members. Helped to suppress cheating and increase trustworthiness within the group.

People don't adopt their ideologies at random, or by soaking up whatever ideas are around them.

People whose genes gave them brains that get a special pleasure from novelty, variety and diversity while simultaneously being less sensitive to signs of threat are predisposed (but not predestined) to become liberals.

They tend to develop certain "characteristic adaptations" and "life narratives" that make them resonate with the left narrative.

Once people join a political team, they are ensnared in its moral matrix. They see confirmation of their grand narrative everywhere.

Liberals might have more difficulty understanding conservatives that the other way round because of their limited moral matrices.

Liberals often have more difficulty seeing moral capital. Which he defines as the resources that sustain a moral community.

Liberals and conservatives are like yin and yang. Both are necessary elements of a healthy state of political life.

Liberals make two points profoundly important for the health of a society:

Libertarians are right that markets are miraculous (at least when their externalities and other failures can be addressed.)

Social conservatives are right that you don't help the bees by destroying the hive.

It binds us into ideological teams that fight each other as though the fate of the world depended on our side winning each battle.

It blinds us to the fact that each team is composed of good people who have something important to say.